An artist in residence and a solo exhibition at The Israeli Center for Digital Art,  Holon, Israel.
4 December 2014 – 3 January 2015
Curator: Ran Kasmy-Ilan 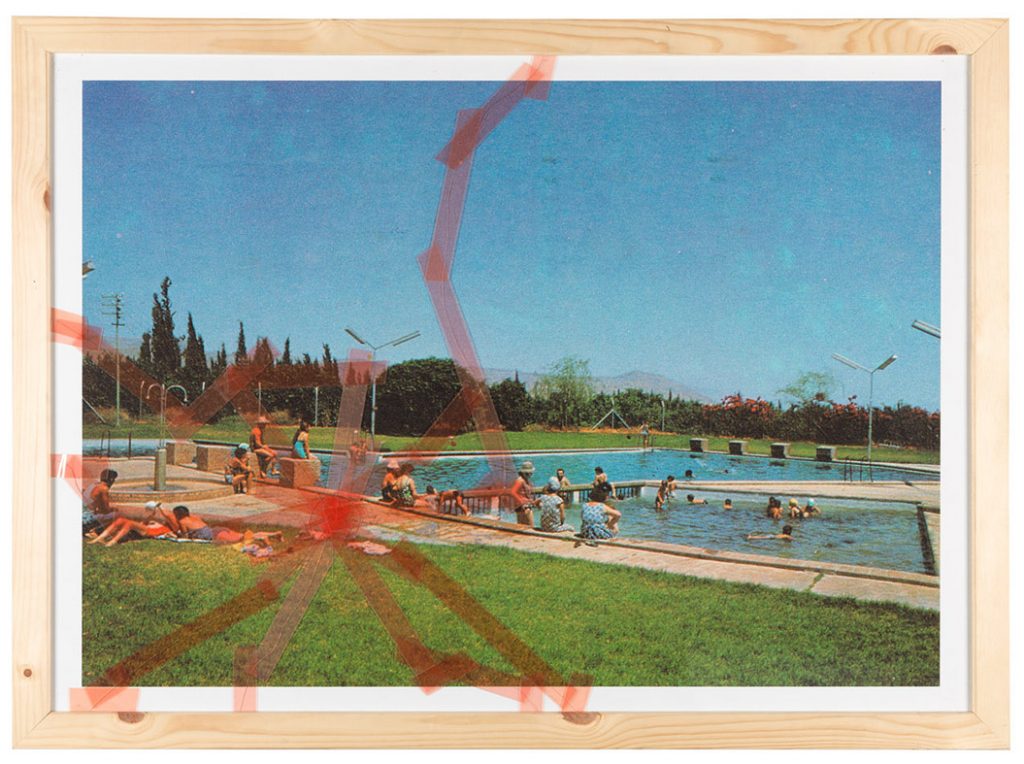 ”Swimming pools are, essentially, man-made containers designed for swimming and leisure. But they do not contain only water. They are also a reference to the sea: a tamed and restricted version, a convenient and demarcated area of nature. These pools are usually blue, also adhering as much as possible to semblance of the sea. And as the blue sea is actually a reflection of blue skies, both a result of the short-range sunrays in the atmosphere, the pool is also a slice of sky. Diving in is a dive into a domesticated sea, a pit of dug-up earth, a piece of highly engineered firmament.

The private swimming pool, a status symbol and culture icon, is the central element of Ruscha’s artist book – “Nine Swimming Pools and a Broken Glass” (published in 1968). The book is comprised of 64 pages that include 9 seemingly random pages of glossy color photos of private and unidentified swimming pools from around Los Angeles, and one additional page featuring a photo of a broken glass on a blue background. The other 54 pages are left blank.

Ruscha’s swimming pools – in lustrous hyper-realistic blue, still and empty of people – are the foundation for the project “6 SWIWMMING POOLS BEHIND BROKEN GLASS” of Slovenian artist Tanja Lažetić, who has gathered photos of swimming pools of kibbutzim convalescent homes.

In contrast to Ruscha’s desolate pools, Lažetić’s images from photos taken in the ‘70s are vibrant with life. But like the barren pools of LA’s ultra-rich, the lively kibbutz pools were also politically laden icons. In 1981, after one of Israel’s most tense and violent election campaigns, the Likud Party leader Menachem Begin spoke of “the millionaires in the kibbutzim with their swimming pools”. Pools were used to establish an image of a hedonistic over-privileged homogenous ethnic group versus the huge and marginalized mass of “second Israel”. Begin created a viewpoint that looked at the modest kibbutz pools but saw the opulent pools of LA.

But the actual kibbutz pools are a far cry from Begin’s imagery. Many were constructed as convalescent home facilities – a hybrid that combined nursing home and hotel services. These convalescent homes were open to members of the workers association, often forced to wait for long periods of time before being allowed to “convalesce”. These places were poor, austere versions of the hotel experience we enjoy today, a product of a socialist society that took a severe view of pleasure-seeking and unproductive leisure time.

Ironically, it was Begin’s two Likud administrations that adopted a liberal economic policy which began the privatization process of Israel’s economy, thus only exacerbating the polarization of Israeli society. The attempt to dismantle the established powers of the Israeli socialist left wing created new power classes, but the plight of development towns remained and was continually ignored. The numbers of Israel’s marginalized population swelled, and over time this liberal economic policy would end the traditional kibbutz structure, and convert the use of land from agricultural and industrial purposes to huge shopping malls whose profits (and State profits incurred by allowing their development) are divided with gross inequality.

In this context, it is interesting to note that the same year Begin made his statement about the over-privileged kibbutzim, the “Isrotel” hotel chain was established, providing a new economic aspect to Israel’s leisure time culture. No more modest convalescence, but true laissez-faire unapologetic indulgence. No more modernist buildings designed to blend with nature, now hotels stood sky high. No more recuperation and growth, now the focus was consumption.

Lažetić’s compilation of swimming pools was gathered from old postcards that “convalescents” sent home to their families. Lažetić scanned postcards, reprinted them and framed them, then shattered them with a hammer and reconstructed them with clear adhesive tape[i]. Ruscha’s broken glass image – a formalistic act adding to the impact of the West Coast’s fancy and abandoned pools – is transformed by Lažetić to amalgamated shards through which we see a completely different image. The broken glass, providing the same effect as the swimming pool photographs, becomes a screen through which we view Israel at the point between socialist market forces and a capitalist economy. The glued fractures map out the mechanism of collective image manufacture.”

[i] Lažetić employed this exact same method in 2010 with photographs of Yugoslavian swimming pools from old tourist brochures. This work was exhibited in the 6th Triennial of Slovenian Contemporary Art: Idea for Living – Realism and Reality in Contemporary Slovenian Art U3 curated by Charles Esche. 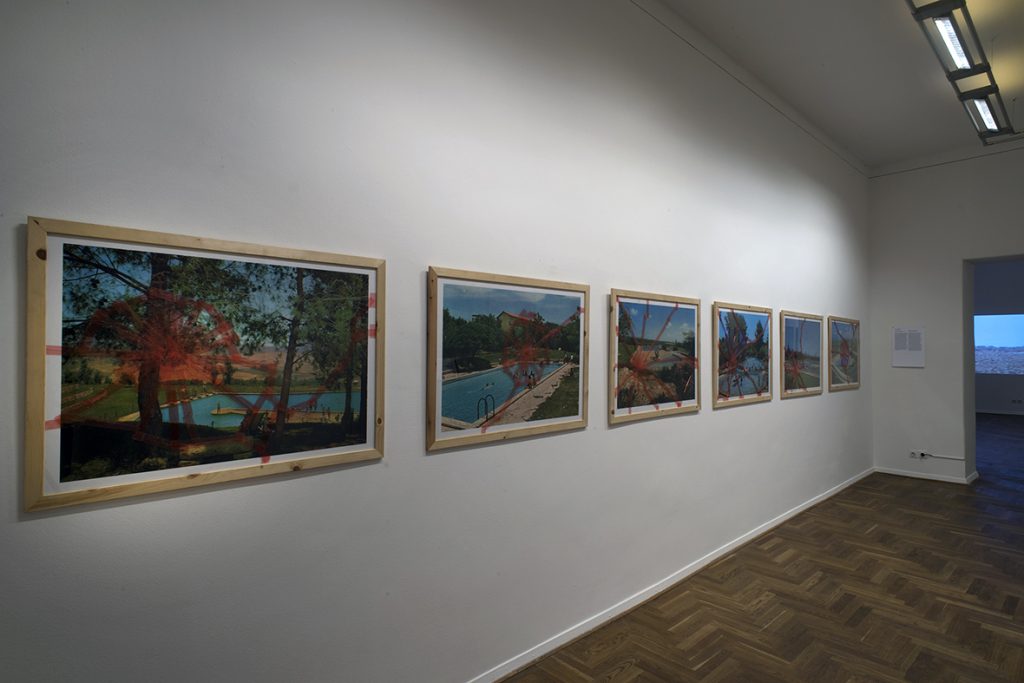